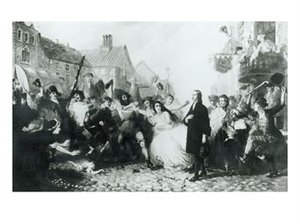 The Mobbing of John Wesley at Wednesbury

John Wesley was one of the so-called “super-erogation men” (i.e. a member of the Holy Club), a preacher who help birth the English Awakening (the forerunner of the Great Awakening in America), and the founder of the Methodist Church. Hundreds of thousands were converted though his preaching, much of it open-air.

As a relatively poor college student at Oxford John Wesley live on 28 pounds sterling a year and gave away the rest. As his fame grew, so did his income. Royalties and sales from his many publications provided him with probably the highest earned income in England, more than a thousand pounds a year. Yet, he continued to live on 28 pounds and gave the rest away as quickly as it came in.